Really, I'm still around, just been super busy, what with a new puppy, The Mate getting his new wheelchair, and attempting to get more work done on the house. So for tonight, let's just look at several pictures I've taken with my phone to share with my BFF.


Here's a picture of my challenge water marble, holding an orange.

And this is Ruby Kisses Blues Clue. I love this blue. And yes, I was in the bathtub when I took it.

Check out this awesome car we saw at the gas station! I cleaned out the frig and made it all neat.

How about my tiny haul while we were picking up the aforementioned puppy?

Some Funky Fingers, and a few others. You may have seen some of these in manis already. Yeah, yeah, I'm slow. Oh well. Ooh, right this instant, this is what I have on my nails:

I'll post better pictures of that in a couple weeks probably. Haha. Back in like, November, I found a bunch of polishes on clearance, and grabbed them. I took a phone pic then, and never shared it. Here it is!

I took this cool picture of the moon rising over the neighbor's house one night a few weeks ago, and I like it a lot.

And now, I've saved my favorite one for last. This is from my swap with the lovely Happy Berry Naiad, who sent me a FANTASTIC package all the way from Singapore! I just put all the polishes in one pic, and I can't share the other stuff, because it's being used. Like the adorable pink coin purse she sent, which is hilarious because I was was TOTALLY looking for one. Well now I have one. And I also have these GORGEOUS polishes! 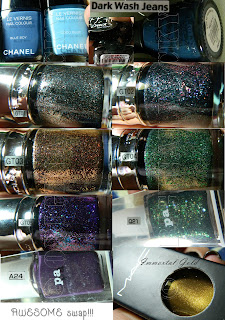 So like, that is two of the three blue jean Chanels, and the dupe to the third (the Nubar). Already, I'm dying from happy, right? But then, there is the whole Tony Moley Galaxy Collection! Just look at those awesome glitters!! But that wasn't all, there were two PA polishes, including my huge lemmings paQ21!!! And I'm totally not turning my nose up at MAC Immortal Gold (is that the name? I'm sooo forgetful lately), because it's almost like a yellow, and we all know that's my favorite nail polish color. Ooh, and I almost forgot to mention up there on top - there is a black crackle polish in there too. How awesome is that? VERY AWESOME!

Okay, so it's getting late, and I have to get the dogs out one more time, and then crawl into bed. Tomorrow we have a bunch of junk to do, and this weekend is the dog show locally, so I'll probably be missing in action until next week. We'll just see, it depends on lots of things.
at 1:34 AM