Neat Giveaway and a Stray.

In all my cruising around the internet, I really do come across a lot of giveaways and such. Now, lately I've not been keeping up with them very well, but I'm going to try to start doing better, so here's one now. DO check out all the lovelies in this giveaway over at BeautyBurg! 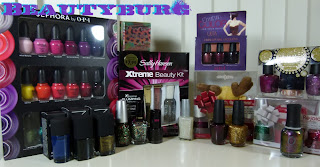 Talk about starting the new year off with a BANG! You can pop over here to enter, and this runs until January 31st. Seriously? DO it. And good luck.

Now I'm going to show you what I found on the street one cold and snowy night. This poor guy was out there in the freezing cold, shivering!

He was really friendly to me, and with a little coaxing, he jumped right in the Jeep. (These pictures were taken on the way to turn him into a local rescue, not at night.)

Since it was really late, I brought him home, locked up my dogs, and set him up with a crate in the spare bedroom. He was an intact male, so there was no way I was going to let him mix with our dogs, and as it turned out later, that was probably a good idea.

The tag on his collar wasn't readable, and when we woke up in the morning, I called to see if Animal Control could pick him up. Of course, it was a Saturday, and they don't work on weekends. Go figure. The nice officer who answered told me I could either hold onto him until Monday, or turn him loose. Yeah, like I was gonna turn a dog loose in freezing temperatures. So I called a local rescue, who said they could take him, but I'd have to pay a $15 intake fee. (I know, that sounds like so little, but there are a LOT of people in our area that literally canNOT come up with that for a stray dog. I wish it weren't mandatory, but I do get how it's needed to prevent people from dumping every animal they can. Since Animal Control will pick them up at no cost, at least it's not the only option.)

Yikes, right before payday is never a good time to need to throw out extra money. So, when we went outside, I let him go to see if he would run for home. I figured I could follow him and make sure he got there. Well, that went over like a lead balloon, he headed right back for our door, looking at me as if to ask if I was crazy to leave him out in the cold. Of course, it didn't take me long to think about it and decide it was worth it to make sure he was safe and warm. But it couldn't be in our house, because we already know our dogs don't take too well to others sometimes.

So, instead of using my coupon at Sally Beauty, I took that money and drove him over to the rescue's shelter, and turned him over. While I was standing in the little lobby to fill out the paper and give them the money, he tried to lunge at a couple other dogs, all growly, so there's a shot he's dog aggressive. Like, I said, good reason not to let him in with our dogs. But at least he was now somewhere safe, and they'll look for a microchip, check other records, and try to find his owner. If nobody comes forward to claim him, then they'll test him, vet him, and put him up for adoption.

He was quite friendly towards people, and didn't show a lot of interest in our cats (he was leashed as I walked him through to the spare room with the crate), so I have no doubt that he will make somebody a sweet pet if his people don't find him. And if they dumped him? Then they don't deserve him.
at 1:49 AM