I have so many swatches, that I can hardly believe it, as I wasn't editing them for a while there. But first, I have a couple giveaways to share with you, so you can maybe win some great polishes, and one piece of stupendous news. Also, I want to share a few interesting blog posts with you. So let's get started!

The stupendous news is that I won something way way way special! Lucid Bubble had a raffle for Clarins 230, and I WON!!!!!! I seriously almost fell out of my chair when I saw that in my email inbox. Not that I'd forgotten exactly, but I'd sort have put it out of my mind, figuring I wouldn't win, and that was okay, because the money to enter was for a great cause. (By the way, she'll still take donations if you're feeling generous.) I've stalked that polish on Ebay for a long long long time, but could never pull the trigger on that much money for ONE polish. So, you can bet there will be a billion pictures on the blog once that arrives.

Now, for a couple great blog posts that I've read recently and thought maybe I should share. First up, Cel's Deconails has this post, about nail polish jewelry. I think I might want to try this out, because it looks like so much fun! I've used glittery nail polish to make my barrettes all shiny and pretty before, but I never thought about jewelry. You'd think I would have, but nooooo, I never did, much as I'd like to take credit for it. The next post that I would love to share is over at My Simple Little Pleasures. It's a drag marbling tutorial that I am going to attempt at some point. I'm just barely getting the water marbling down, so who knows how this will turn out on me, but it looks awesome.

And now, a giveaway that you should enter! 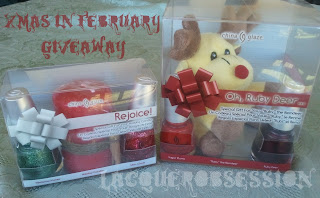 Lacquer Obsession has a lovely giveaway with TWO prizes! The deadline is February 28th, so run over there and enter, and while you're there, check out her blog, because it rocks. It never fails to amaze me how many really awesome blogs there are out there for nail polish, and I love that I can learn so many things from so many different people.

So, do go check out those neat things when you can, because it's worth it. And now, I'll share some swatches with you. Let's start with Revlon Perplex, which seems to be quite popular lately.

It's a nice color, though not my favorite. Hey, I'll admit it,I like the blingy bright stuff the most. But I've been seeing this all over our town, so I grabbed it. And a couple extras. Hee.

I love the shimmer in there. It makes it POP.

What a fantastic red this is!

Now let's see Mini Divas in Sweetheart. I picked this up at the dollar store.

It's a lovely deep pink, and kinda jellyish.

For our last two, we'll peek at a couple of Georgia polishes. The first one is Tootsie Roll.

I've often said I'm not a 'brown kinda person', but it's not like I hate them or anything, I just tend to go brighter. The shimmer in there is pretty nice!

And last, but certainly not least, is Rocky Road.

The silver shimmer in that one is very nice, and makes it lean kinda towards taupe. And that's enough for now, I'm going to make some steaks for dinner, and then hopefully I'll have some time to post more later on.
at 5:30 PM